1 December 2016 speaker in the Visiting Artist and Lecturers Series organized by the School of Art & Design was Tomáš Procházka (also known as Federsel), a musician, improviser, sound artist and performer. 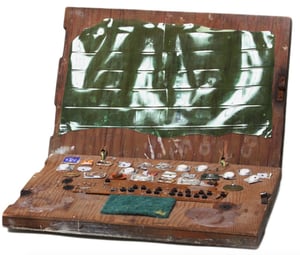 In a wide-ranging talk he discussed technology and objects in performing arts, the Japanese concept of wabi-sabi, media archaeology, primitive solutions and DIY access in contemporary theatre, based on his work with theatre group Handa Gote Research & Development. The group has worked since 2005 at the boundaries between theatre, contemporary dance, the visual arts, music, performance and conceptual art.

Tomáš Procházka also performs in a number of bands including B4, Gurun Gurun, Radio Royal, Federsel&Mäkelä, Wabi Experience, Poisonous Frequencies, as well as solo under the name Federsel. He works with field recordings, media archeology, and all kinds of electric and acoustic instruments, as well as purely electronic (mostly analogue) systems.

In theatre, his main research is in the field of postdramatic and anti-mimetic theatre with elements of visual art, performance art, craft and technology and crafts.